Archive for the ‘Assignment’ Category 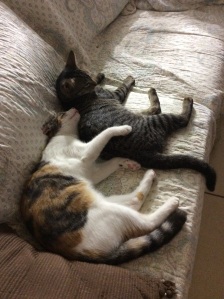 If I had taken the time to get out my Good Camera, or even my cell phone, I would not have been able to catch the kitties in such a loving position. The striped one may be 3 months younger, but he’s bigger and much more gentle. On the other hand, she has been the epitome of patience in teaching him about his new home and trying to get him to join her outside. Truly Besties.

While driving around the island on errands and business during the past two weeks, I haven’t been able to find composition items that would meet the criteria of most assignments. As I was reviewing this past week’s assignments for Photo 101 at home, and feeling rather badly that I had gotten so far behind that I couldn’t really catch up, I began to find things in the household, or “possible” photos from other assignments, that seemed to fit the bill for some of the assignments for this last week of the course. Earlier, I found a “motion” shot from some beach pictures I shot the first week but didn’t use; then I hooked into an earlier Blogging 101 post that gave me an idea for a scale and perspective project. My home and hobbies are providing me with pieces that are fitting the themes for this week. One more photo after today and I will have only skipped the second week assignments–but I may be able to finish some of those tomorrow, if I can get myself away from my computer for a break and walk around my community–and as long as it’s not raining so I don’t “douse” my new camera before I’ve learned to use it properly. Interestingly, it’s not my new camera that I’ve used for my favorite photos–it was my iPad Air and iPad Mini that produced most of the photos I’ve used for this course. And here is another one.

I’ve been taking oil painting classes in addition to drawing classes, and I realized while looking around my seriously messy living room that I had started an oil painting that both starts and will result in a “pop of color” image. Although the oil needs a lot more work, it is primarily the shades of green in the background and a few muted cornflowers that will be added. The center–and central part–of th photo is a bright poppy that seems alone in a field of eventual muted greens and blurred blues, and unfortunately does not adhere well to the rule of thirds..

So I decided to take a shot of my unfinished work, because it already meets the criteria of a genuine pop of color. 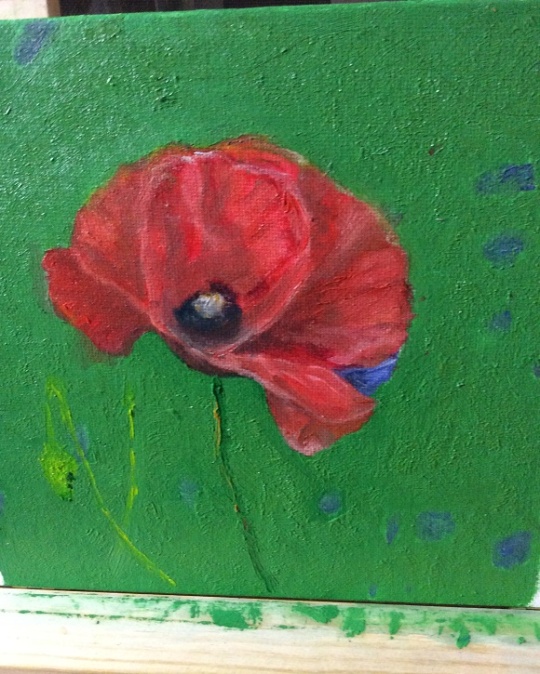 I was not going to publish any more for Photo 101, since I am so short of time and so pressed for subjects. But this assignment on Scale and Observation allowed to me link it back to a Blogging 101 assignment I had done several days ago, on my favorite toy as a child–which, especially back in my day,was an unusual toy for a father to give a five-year-old daughter. I became very excited over this assignment because I have this huge piece of brain coral, a couple of Lego figures and props, and a new art gallery event poster which I picked up today by pure chance. I decided to create a meaningless little tableau, which I hope you find as whimsical as I do. 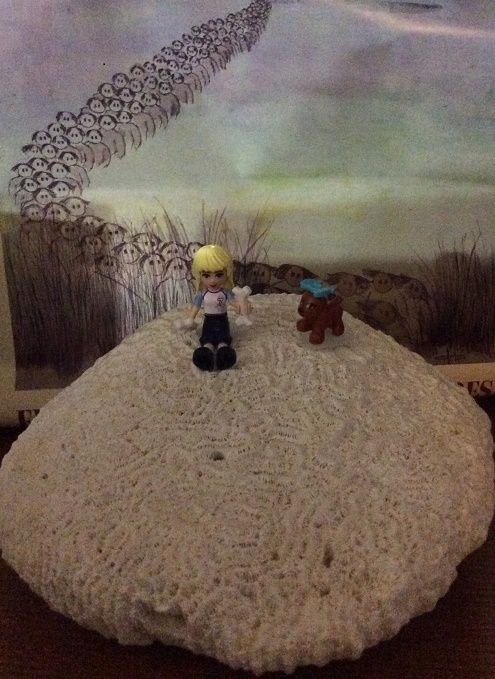 Almost Alone on the Hill

OK. One last post, since I took this photo with the intention of using it with this class anyway.  I have a wide view and and narrow view of this scene.  Although the narrow view shows the foam of the incoming waves, I think this one shows the movement of said waves better.  Remember, I’m photographing from the very eastern outskirts of the Caribbean Sea, so we don’t get much in the way of waves unless a storm is coming–at least not on the western side of the island (the eastern side borders on the Atlantic Ocean and has entirely different waves–more like the ones I remember growing up in New Jersey).  However, you can almost see the waves coming in before they decide to break… 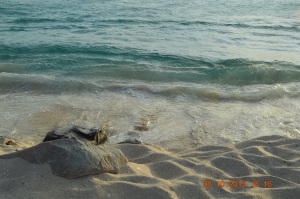 I actually like this photo because it hides some of the tourist debris (empty plastic tea and water bottles, empty beer cans, other non-degradable debris).  I also like the way the sand demonstrates a bit of the movement it went through during the long hot day.